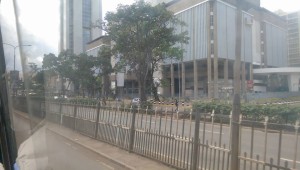 Central Bank of Kenya Governor Patrick Njoroge announced on Wednesday that the regulator will not register any new bank in the near future.

The Bank placed a memorandum, which was circulated to all banks, stating that no bank will be issued with a license in the near future until the Audit which is being conducted on local banks is completed.

This follows a case in which Imperial Bank depositors lost over Sh32 billion over a period of 13 years through unscrupulous means. Nearly all the depositors have not recovered their money even after the Government closed the bank last month.

The new directive from the central bank means that some of the SACCOs which were in line for registration as Banks have to wait for some time. Example is Unaitas SACCO, which has seen its shares being purchased at an alarming rate as Kenyans expect its share price to shoot as the SACCO goes public in 2017.Currently, its share price goes for Sh 10 and if it goes public, it’s likely to double.

It is believed that Central Bank will issue another directive requiring all small banks that have not met the minimum threshold of Sh5 million capital to merge or be absorbed by big banks like Kenya Commercial Bank.

News of Banks expected to be closed emerged in October, which impacted negatively on the performance of the Nairobi Securities Exchange. It even prompted the CBK Governor to come out and make it clear that the Government has no intention of closing such banks.

A lot has been going on in the Kenya Banking sector, which the CBK was not aware until the Imperial Bank Board reported the matter to the regulator. It is believed that the Auditor are compromised by the management of various banks in the country not to reveal the exact status of their financial statements, which leave depositors at a risk of losing their money to these selfish individuals. This is the main reason why Central Bank of Kenya has decided to Audit all banks and come up with ways to seal loop holes.

NGOs to Drop CVs in Nairobi

Most Marketable courses to study for jobs in Somalia

Profitable business to start with small capital in...

Best Business Indians to start in Kenya to...

Business Success Story in Kenya: How I Made...

Best Business to do in Eastleigh Nairobi and...

Towns to Start Business in Kenya with small...