This is How English Premier League Table looks Like Today

Several matches have been played today in the English Premier League, which saw Liverpool surge to the top of the League for the first time with 26 points. Chelsea are 1 point shy while Manchester City are third with 24 points. Arsenal have dropped to their usual position,4,after playing 11 games, same games to top three teams. 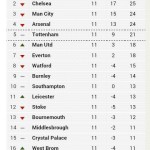 Most Popular Prophets in Africa

This is What Dr.Ben Carson Said About Donald...

Celina of Mother in law was broke!

How to use LongTail Pro Keyword Tool to...

Be Happy at every moment in your life

How to Get Identity documents in South Africa