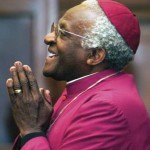 Nobel Peace prize winner, Desmond Tutu, has shown signs of committing suicide after he called upon politicians, religious leaders and doctors to help him end his life.

A shocking article published on Friday this week revealed that the respected religious wants assisted death as he is tired of living.

“With my life closer to its end than its beginning, I wish to help give people dignity in dying,” he wrote in the Washington Post.

Desmond Tutu: a dignified death is our right – I am in favour of assisted dying

“Dying people should have the right to choose how and when they leave Mother Earth. I believe that, alongside the wonderful palliative care that exists, their choices should include a dignified assisted death.”

Tutu had changed his mind over assisted suicide two years ago after a lifelong opposition but had remained ambiguous about whether he personally would choose such a death.

He said: “Today, I myself am even closer to the departures hall than arrivals, so to speak, and my thoughts turn to how I would like to be treated when the time comes. Now more than ever, I feel compelled to lend my voice to this cause.”

He added: “I have prepared for my death and have made it clear that I do not wish to be kept alive at all costs. I hope I am treated with compassion and allowed to pass on to the next phase of life’s journey in the manner of my choice.”

He said: “For those suffering unbearably and coming to the end of their lives, merely knowing that an assisted death is open to them can provide immeasurable comfort.”

He concluded: “In refusing dying people the right to die with dignity, we fail to demonstrate the compassion that lies at the heart of Christian values. I pray that politicians, lawmakers and religious leaders have the courage to support the choices terminally ill citizens make in departing Mother Earth. The time to act is now.”

This clearly shows Tutu is tired of living.

This Is The Lady, Brenda Chepkoech, Who Is Accusing Chris Brown of Smashing Her Smart Phone

How to Increase the CRT ?

How to Apply for Death Certificates in South...

Kenyans don’t have faith in Uhuru Kenyatta,he will...

Chinese stocks Increase By more than 6%