Jeb Bush,a staunch  Republican believes Donald Trump does not have the capacity to become the 45th American President.This comes after Trump was recorded talking [email protected] about women and [email protected]

In the conversation, Trump is heard telling Billy Bush that since he is a celebrity, he can sleep with any woman since they are cheap.

Below is Jeb’s response to Trump 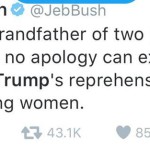 And below is Trump’s conversation 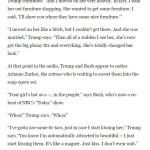 From the conversation,clearly Trump does not deserve to be president.

Where can somebody with a Degree in Law...