Patrick Lumumba is one of the most eloquent lawyers in Kenya. His CV is so decorated that even other lawyers consult him on matters of law and governance.

The former EACC chair joined the University of Nairobi as a Lecturer after completing his PhD from the University of Ghent. He lecture red Law classes until the year 2010 when former President Mwai Kibaki appointed him Director of Ethics and Anti-Corruption Commission.

Patrick served as the Director of Kenya Anti-Corruption Commission from September 2010 to August 2011, when parliament of Kenya voted to have him removed as the Chair after he crossed the red line.

Even after he was sacked as the Director of EACC, Lumumba continued to be focal as he continued lecturing at the University of Nairobi. He also continued serving as the Trustee and the Executive Director of the African Institute of Leaders and Leadership, Nairobi, Kenya 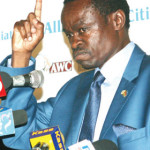 How To Invest in Cooperative Bank and Become Rich

A Luo Man Stole My Money, Do You Mean Kikuyu Man?

Is Project Management Marketable in Kenya

Best Universities To Study in Zimbabwe

How Much Money does Ghafla Make Per Month

Companies to apply for jobs in Mombasa Road...

How to Earn $100 per Day from AdSense