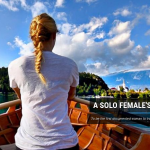 Cassandra De Pecol is the woman who has traveled all the countries in the world, within the shortest time, breaking the Guinness World Record.

The 27-year-old started her journey at the Pacific island of Palau in July last year, she took six weeks to cover 196 countries, becoming the first person alive-dead to cover all the sovereign states within six weeks.

Following her achievement, Cassandra De Pecol describes her experience as amazing on her blog https://expedition196.com/

“As a young woman, I’d always dreamed to travel to as many countries as possible and make our world a better place. It bothered me though, that I could never figure out how to ignite this inner fire and make it happen”

Initially,her intention was to break the record,but after achieving her goal she changed the course.Pecol now wants “to give myself to the lives of others and our world”.

In her growing blog,she says:

“Now, almost two months and 18 countries in, my priorities have shifted for the better. I want nothing more than to give myself to the lives of others and our world.

The initial goal of traveling to every single country is not nearly as meaningful as was at the start. Looking into the eyes of the youth and hearing them realize their potential and limitless possibilities through listening to me speak — this is what I live for”

Her trips are funded by sponsors and family members. To date, she has spent over $200,000.

De Pecol is also travelling as an Ambassador for Peace and Global Citizen via the International Institute for Peace through Tourism.

Though her story looks amazing and exciting,Pecol explains her challenges especially travelling across Africa.In one of the photos,she explains how she felt in the African soil:

“Traveling through Africa has been the most challenging for me. It’s not only the most expensive leg (flights, hotels), the one that requires the most visas in advance that are also expensive, but physically challenging as well, with needing to be careful with my water and food intake, malaria prevention, etc. as well. In my lifetime, I’ve experienced an immense amount of poverty in countries around the world and have lived/worked in impoverished nations, but I’ve never seen anything like what I have seen so far throughout Western Africa in particular. I’ve had such an urge to want to jump outside of my body and leave everything I have to just walk through the villages and live with these people, sit on the side of the road with them. The other day driving around in Bamako it took everything in me to not just jump out of the car and start walking into the dead of night. I can’t explain this feeling but I don’t expect anyone to relate, as if this Expedition were unrelatable enough, but I’ve never really had the feeling of wanting to become invisible to the point of where I can safely live like a local in some of these countries, without being viewed as a tourist or “white girl” or that I had any money at all. When I’m in these places, I feel for these people and the way they live. I can’t believe that if I were back in the states this weekend I’d probably be concerned about feeding my dogs more than myself, and baking a pumpkin pie or going to Starbucks for a pumpkin spice latte. But this weekend… I’m here. And it pained me to eat even just plate of steamed vegetables knowing that these people outside are suffering in this 95 degree dry heat, landlocked with little resources for water and food, where the life expectancy is just 54 years old. Maybe when you drink a pumpkin spice latte today, you can think of this. These people would kill for one (I would too, figuratively speaking ?). It’s not to feel guilty for what we have, but I think we have a responsibility as earthlings to be educated and subconsciously aware. At the end of the day, we don’t have a choice what society we’re born into, but we can at least be aware”.

Despite the challenges she hopes to make a difference out of the experience:

“For me, it’s not about the journey, it’s about the destination and doing something big, impactful. And for me that’s breaking a record, winning a race or doing way better than I did before, or proving people wrong about something or myself.

For me, I think if there wasn’t such a stigma to impress others, there wouldn’t be as much of a push to impress myself — as f***ed up as that sounds. Easier said than done, but you can do anything you want to do.

Sometimes I think of that guy Ranulph Fiennes, he’s like 78 and to this day continues to break records; travel records, endurance, etc. I wonder if that’s all that keeps him going in life. Once he made that first attempt that was so amazing, how could he go back to living a mundane life?

So he made it a life goal to keep going with the records and expeditions, and maybe that’s how he keeps going.

Pushing your own limits in some impactful way and forget everyone else. Just keep carving into something for as long as you can hold out for”

How to Apply for Death Certificates in South...

There are many reason to be happy